Eurovision 2014 – Not long after last week’s Eurovision Song Contest, several countries revealed their viewing figures for the contest. We’ve done a round up of those that appear to have been published this week so far. See which countries tuned in and which turned off…

So which countries increased their viewer numbers? Who are we pretty much guaranteed to see in next year’s 60th anniversary contest as a result of this?

Austria The interest in winner Conchita Wurst clearly had the Austrians tuning in this year in their hoards. 1.47 million people tuned in for the results. This was a market share up to 73%, which is an enormous increase in viewers in Austria this year. They’ll be straight into the final next year as host country. 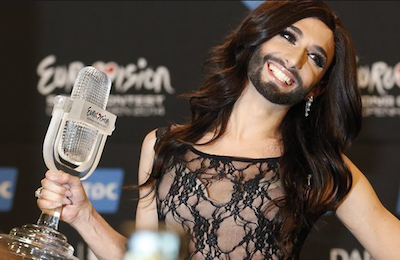 UK The BBC  saw its biggest audience since 2011 and second highest for more than a decade with with nearly 9 million viewers. A 41.9% of the market saw Conchita’s win, with views peaking at 10.5m. The UK Head of Delegation Guy Freeman has confirmed that the UK will not pull out of Eurovision as it gets such great viewing figures.

Sweden still loves its Eurovision with 3.4 million viewers, which represents a gigantic 83.2% of the market share. Eurovision without Sweden would be unthinkable. Count them in.

The Netherlands Building on Anouk’s success last year, the Dutch are currently loving Eurovision and more records were broken. 5.1 million people – up 300,000 over last year – watched this year, peaking at 6.2 million as The Common Linnets performed. 65% of market share is a great result for the national broadcaster and we can be pretty guaranteed of their entry next year on these figures and recent success.

Slovenia saw nearly half the country tune in, excited to see that Tinkara had qualified for the Grand Final. 324,000 viewers, 47% of the market shares, watched the final, a good increase of 17%. They haven’t got far to travel to Austria, so hopefully they’ll be in next year.

Denmark Unsurprisingly for the host nation, 2.4 million viewers watched the contest… a massive 89% of market share. That’s their best figure since 2001. They should be in next year on th back of the current interest.

Germany For some reason viewer numbers increased by 750,000 with 8.96 million tuning in to watch the contest. It peaked at 10.81 million. Perhaps the last couple of years with the revamped national final attracting big names has revitalised interest in Germany. We don’t expect them leaving any time soon.

Australia – The inclusion of Jessica Mauby in the semi-final, and live link ups to Sydney, gave Australia record numbers of viewers this year. 2.971 million Aussies down under saw something of Eurovision at some point last weekend. You’re still not entering though.

Norway Despite confidence from the betting market in Carl Espen, and their success last year, less Norwegians watched this year.1.4 million people watched, representing a very healthy 77.3% but with a decrease of 6.7 %. With that market share it’s highly unlikely they’ll drop out though.

Italy The Italians still show little interest in Eurovision. Only 1.747 million (8.77%) watched. a tiny fraction of the population. RAI must be looking at their involvement. With Emma’s poor result this year, could Italy be the rumoured Big 5 country considering pulling out again? We may cry if they do.

Greece Sadly Greece saw a 11.2% decrease in the market share. More positively however, at least 2.1 million people watched the contest, which is still a strong 55.7% and should hopefully keep MAD TV and Panik Records on board for another year.

Estonia With Tanja not making it to the grand Final, the Estonians lost interest and viewing figures dramatically halved from last year to only 148,000 viewers. Hopefully they will up their game in next year’s Eesti Laul and get back in the game.

France Oh France. Still interest sadly declines. 2.6 million people tuned in, only 13.4% of the population. The Voice beat it hands down. Eurovision has lost 1.4 million viewers in the past 2 years, and France has had little success. This makes us sad. We won’t talk about this year’s result. We hope they don’t start thinking of pulling out. Maybe they need to revamp their selection process and get away from Warner Music acts?

Spain Mixed reactions in Spain. Whilst it was the most watched show in Spain with an OK turn out of 5.141m viewers (35%), it was one of the lowest Eurovision ratings seen in Spain, dropping 200,000 from last year. Market share however went up 2.1%. That should be enough to keep hem on board next year.

The Eurovision Song Contest still remains the largest watched music contest in the world, with up to 180 million viewers.

Do you know of any more viewing figures for your country? Let us know if you do. And who do you think is at risk of pulling out due to the figures?