The Host City and Venue

Vienna (/viːˈɛnə/; German: Wien [viːn], Austro-Bavarian: Wean) is the capital and largest city of Austria, and one of the nine states of Austria. Vienna is Austria’s primary city, with a population of about 1.757 million (2.4 million within the metropolitan area, more than 20% of Austria’s population), and its cultural, economic, and political centre. It is the 7th-largest city by population within city limits in the European Union. Until the beginning of the 20th century it was the largest German-speaking city in the world, and before the splitting of the Austro-Hungarian Empire in World War I the city had 2 million inhabitants. Today it is the second only to Berlin in German speakers. Vienna is host to many major international organizations, including the United Nations and OPEC. The city lies in the east of Austria and is close to the borders of the Czech Republic, Slovakia, and Hungary. These regions work together in a European Centrope border region. Along with nearby Bratislava, Vienna forms a metropolitan region with 3 million inhabitants. In 2001, the city centre was designated a UNESCO World Heritage Site. 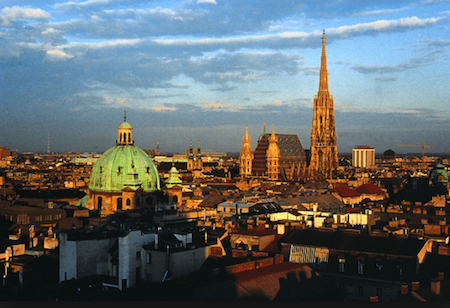 Apart from being regarded as the City of Music because of its musical legacy, Vienna is also said to be “The City of Dreams” because it was home to the world’s first psycho-analyst – Sigmund Freud. The city’s roots lie in early Celtic and Roman settlements that transformed into a Medieval and Baroque city, the capital of the Austro-Hungarian Empire. It is well known for having played an essential role as a leading European music centre, from the great age of Viennese Classicism through the early part of the 20th century. The historic centre of Vienna is rich in architectural ensembles, including Baroque castles and gardens, and the late-19th-century Ringstrasse lined with grand buildings, monuments and parks. (source: Wikipedia)

The Wiener Stadthalle is a multi-use indoor arena and convention center complex located in the 15th district of Vienna, Austria. Austrian architect Roland Rainer designed the hall which and construction occurred from 1953 to 1958. The arena has an overall seating capacity of approximately 16,152 people in the main hall. 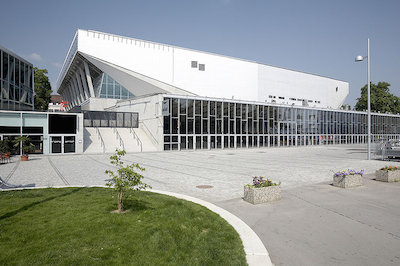 The complex houses six venues (each of which can be used separately or combined) and an adjacent swimming pool, two gymnasiums, an indoor ice rink, a small and a large multi-purpose hall and auditorium with a stage. It serves as a venue for a variety of events, including concerts, exhibitions, trade fairs, conferences, lectures, theatre, TV and sport.

The Wiener Stadthalle is a subsidiary of Wien Holding and stages more than 350 events each year that attract around one million visitors. Halls A, B and C, as well as the Stadthallenbad, are managed by the Viennese sports venues corporation GmbH.

Austrian broadcaster ORF announced 6 August 2014, that Stadthalle would be the host venue for the Eurovision Song Contest 2015, following the victory of Conchita Wurst in the 2014 Final in Copenhagen, Denmark.The arena will host the 60th contest in the main hall, with the semi-finals to be held 19 May and 21 May and the final on the night of 23 May 2015. (source: Wikipedia) 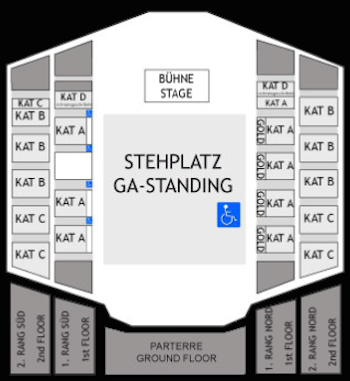 The Eurovillage will be located in the city’s Rathausplatz from 17th – 23rd May 2015. 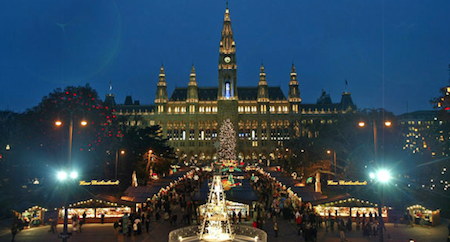 The Euroclub will be located at the Ottakringer Brewery from 17th – 23rd May 2015.

Mush of Vienna’s cheap accommodation was snapped up by eager Eurovision fans as soon as it was announced as the host city. Prices have since risen as usual. For 2 people sharing for 4 nights for the semi-final and final, city centre hotels are currently about £550-£750 for the five nights. (Source: booking.com)

If you fancy doing it on the cheap in a hostel, Hostelworld is offering dorm beds at €20 – €35 per night

If there are a few of you going together for the full 2 weeks, you may want to explore the option of hiring an apartment. (Holiday rentals in Vienna.)