Over the weeks after the Eurovision Song Contest I have posted several analysis of the Voting and the Final score, that I would like to summarize here:

Who voted for Germany?

As we all know (I think

) Germany is the winner of Eurovision 2010. But who exactly voted for them?

Here you can see all the votes Germany received in video and on a map:

Lena has swept Scandinavia, the Baltics, Spain, Switzerland and Slovakia. But surprisingly she also did very well on the Balkans.

The 12 points from Switzerland had to be expected, as her entry “Satellite” had reached #2 on the Swiss charts earlier.

Again with a representative chosen with the help of Stefan Raab the 12 points from Spain go to Germany. The German diaspora on Mallorca and other parts of Spain might have helped.

Scandinavia just seemed to love her style of music. In Sweden she had already charted at #41. And was in the itunes charts of all Scandinavian countries during Eurovision week.

In the Baltics and Turkey the song was repeatedly played on radios, which certainly helped on the night.

The ten points from Turkey are more than deserved after years and years of German 12 points going to Turkey.

The only countries not having voted for Germany are Moldova, Belarus, Georgia, Armenia and Israel!

(Proven by all three participants this year)

Who voted for Turkey?

Turkey achieved their second best result ever this year in Oslo with rock band maNga.

They could traditionally rely on a strong diaspora in Western Europe and neighbour support by Azerbaijan. But who voted for Turkey this year?

Turkey can certainly not be called for either East or West (like Russia for example). Turkey gets high points both from Western nations and Balkan countries.

The 12 points from Azerbaijan went (again) to Turkey, but also France and Croatia gave Turkey their top marks.

10 pointers came from the Balkan (Bulgaria, Macedonia and Bosnia-Herzegovina) but also from Big4 countries Germany and the United Kingdom (which both have a huge Turkish population of course)

Albania, Romania, Ukraine and the Netherlands gave 8 points to Turkey, while no country gave their 7 points to maNga.

Turkey thus has no region in Europe that particularly favoured their song.

Unsurprisingly Greece and Cyprus did not give a single point to the runner-up. Political tensions still seem to prevent Greeks to vote for their Eastern neighbours.

Who voted for Romania

Romania – Paula Seling and Ovi achieved the best Romanian result ever with “Playing with fire”: a third place!

They were third in 2005 too tough with Luminiţa Anghel & Sistem and “Let me try”.Romania has also never failed to qualify for a Eurovision Final since the introduction of the semifinal(s)

But who helped Romania to achieve such a great result by giving them their points? 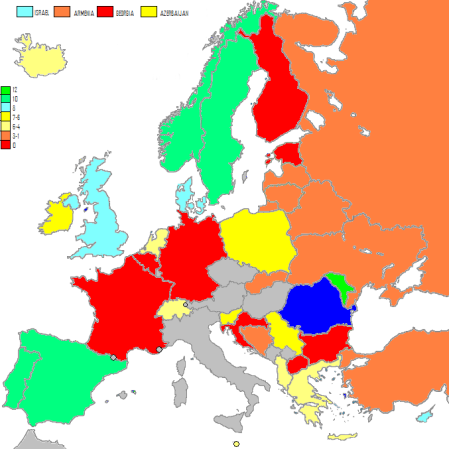 Their only 12 points came (as every year) from neighbours Moldova.

10 points came from Norway, Sweden, Portugal and Spain. I would divide these 4 countries into 2 groups.

Norway and Sweden probably voted for Romania (apart from the good song), because Ovi lives and works in Norway and speaks perfect Norwegian. Also “Playing with fire” is the type of music Scandinavians are usually fond of (see Denmark’s 8 points)

Spain and Portugal’s 10 points can be explained with the huge Romanian diaspora on the Iberian peninsula.

On the Balkan the song was not as popular. 6 points from Serbia were the highest points Paula and Ovi got there. In all Romania did not have a region in Europe that particularly favoured its entry. In some countries it was very popular, while in neighbouring countries it wasn’t (Azerbaijan-7 ; Georgia-0) (Sweden-10 ; Finland – 0).

Who voted for Denmark?

Denmark – Chanée and N’evergreen achieved the best result in years for the Scandinavian country just a month ago in Oslo. Their Eurovision-popsong “In a moment like this” got points from a lot of European countries and thus reached 4th place behind Germany, Turkey and Romania.Was the Scandinavian block at work again? And who also voted for Denmark? Find out:

Usually, when a Scandinavian country reaches the top 5 every single one of the Northern nations will have given it top points (most of the time 12). Not so this time: The only 12 points from the North for Denmark came from their buddies in Iceland. Norway and Sweden both liked Germany and Romania better and only gave Denmark 8 points. Finland only had meager 3 points for Chanée and N’evergreen.

But who helped Denmark achieve the 4th place then? It’s a diverse collection of countries: Ireland gave Denmark their 12 points, as well as Poland, Romania and Slovenia.

These last two are quite interesting. While Romania gave 12 point non of their neighbours gave Denmark a single point. Also Slovenia’s twelve are the only high points it got from Ex-Yugoslavian countries. N’evergreen is supposed to be popular in Eastern Europe, so that might be an explanation. Furthermore, Denmark got 10 points from Latvia and 8 from Malta.

Germany was rather unthankful. They got 12 points to Denmark, but didn’T return the favor at all: Nill points from Germany.

In the Caucasus and on the Iberian peninsula, “In a moment like this” was rather popular getting 4 or 5 points from Armenia, Azerbaijan, Spain and Portugal.

This shows that Denmark did not have to rely on one region in particular for its points, which is an indicator of a good placing. For a win you need to get points from almost all the countries though and Denmark did not. The 4th place should make the Danish proud tough!

Who voted for Azerbaijan?

Azerbaijan was the hot favourite to win this year in Oslo. They had spent millions on promotion and were hoping to win for the first time, but all the money only heaved them to 5th place. But who voted for Azerbaijan and even more interesting: Who didn’t?

The 12 points from Turkey come as no surprise! In 3 participations Turkey and Azerbaijan always exchanged their 12 points. I guess we have a new Greece-Cyprus here!

The 12 points from Bulgaria could also be expected to go to Azerbaijan, as “Drip Drop” had already been played by radio stations there.

Malta also gave top marks to Safura. In the past Malta has many times given their 12 points to countries that were far from the Top 10. This year allegations arose that Azerbaijan had sent money to employes in embassies in smaller countries so that they could vote for Azerbaijan. whether this is true is not clear yet, it would explain the 12 points from Malta tough.

The song did quite badly in Western Europe, only Spain and Norway gave it more than 6 points.

Very surprising are 10 points from Cyprus. The Islands didn’T give any points to runner-up Turkey, but the other Muslim country in the region got high marks from Cyprus. Maybe it was all about the music styles afterall?

Armenia did not give a single point to its neighbour (and as it seems rival). Their petty fights overshadowed the aftermath of last years Eurovision Song Contest and this year problems arose again between the two Caucasus nations

Who voted for Belgium?

Belgium – Belgium has reached the final for the first time since 2004 this year with Tom Dice’s “Me and my guitar”. In the final it reached a very good 6th place and thus the best position for Belgium since they were the runner-up in 2003. But who voted for Belgium and more interestingly who didn’t?

In general we can say, that Belgium was more popular in Western and Central Europe. Its only 12 points came from

neighbour Germany. The German jury said after the contest that Belgium was their favourite and Tom Dice has already announced to start promoting his single and album in Germany soon.

The 10 points came from Ireland, Iceland, Denmark,Malta, Poland and Slovakia.

In the rest of Scandinavia the song was not as popular as in Denmark and Iceland getting only 2 points from Sweden and 3 from hosts Norway.

Belgium also got some support from neighbours France (7 points) and the Netherlands (6 points) but less than in earlier contest. The Netherlands hadn’T qualified to the final and so the diaspora vote was probably much more powerful in that country.

Overall, the song got almost no support in the Balkans and the Caucasus, but also Big4 nations Spain and the United Kingdom didn’t give Tom Dice a single point.

Who voted for Russia?

One of the most controversial entries this year was certainly Peter Nalitch and Friends with their entry “Lost and forgotten” from Russia. Incomprehensibly to many Eurovision fans and to the audience in Oslo (who booed high points for the entry several times during the voting), the song and Russia achieved 11th place.

Here you can see which countries voted for Russia:

Russia got an average of 7,6 points from former soviet countries. The only ex-soviet country, which didn’T give point to Russia was Georgia. This comes as no surprise as Russia and Georgia had fought a war in 2008 (which is also why Georgia didn’t enter the Contest last year in Moscow).

The only Western country giving points to Russia was Portugal (2 points). Russia also got 10 points from Israel, undoubtedly because of the strong Russian diaspora there.

It has to be noted, that Peter Nalitch is a huge internet sensation in Russia and neighbouring countries, which may be a reason for the song’s popularity. Or maybe we just don’t get the Russia humor!?

Who voted for France?

France – The World Cup wasn’t even a month away from the Eurovision Song Contest this year and so France3 decided to promote their official World Cup song through the Contest. Jessy Matador’s 12th place is one of the better positions France has achieved in recent years, which apparently didn’t help the French Équipe to play good soccer in South Africa…

But who gave France points this year and almost as interesting: Who didn’t? 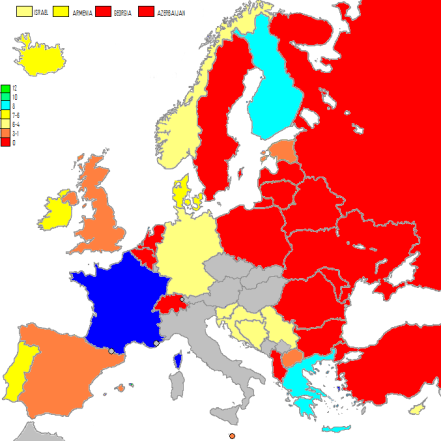 France got no points at all from neighbours and (partly) Francophones Belgium and Switzerland and almost all of (very) Eastern Europe.

The most popular the soccer anthem was in Finland and Greece receiving the maximum of 8 points.In both of these countries the song managed to chart relatively high after the contest.

In Denmark and Portugal, who both sent teams to the World Cup, the song got 7 points.

Jessy’s song was also relatively popular on the Balkan, getting at least 1 point from each of the participating former Yugoslav countries.

Support from the other Big4 countries was rather small with Germany giving 3, Britain and Spain 2 points.

The only Ex-soviet countries voting for France were Armenia and Estonia. Last year Patricia Kaas, who is very popular in these countries could garner more points (f.ex 10 from Russia) for “La Grande Nation”

Ireland, who was kicked out by the French in the qualifications round for the World Cup gave France 6 points! Thierry Henry, who touched the ball with his hand, had not been punished which caused a big scandal as it possibly deprived Ireland of their spot in the World Cup.

Having France’s results in the last 5 years (except Madame Kaas) in mind, this entry has to be seen as a success!