Litesound to Play in Amsterdam

Posted by hulluna on September 1, 2015 in Belarus, Former participants

Former Participants – Former participants of Belarus, Litesound, who represented their country in 2012 in Azerbaijan, are to play a concert in the Netherlands. The concert will take place at CC Muziekcafe on 2nd October 2015 from 21.00h(CET). Entrance fee is only €5.

Litesound are a Belarusian rock group founded in 2005 by brothers Dmitry (Dima) and Vladimir (Vova) Karyakin. They represented Belarus in the 2012 semi-finals with ‘We are the Heroes‘.

Since Eurovision their song “Brothers” became the official anthem of the World Cup Ice-Hockey 2014. In 2015, Litesound recorded the soundtrack to the show UFO. 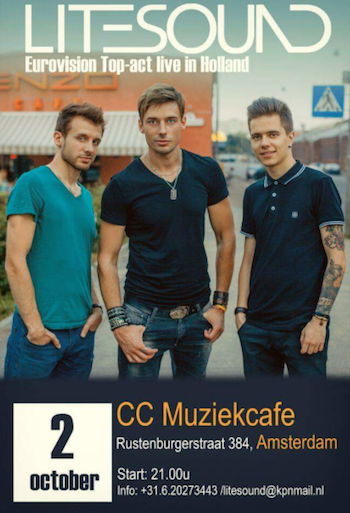