Turkvision – Celebrations have been taking place in Kazakhstan after it won this year’s Türkvizyon song contest. The alternative competition, established by Turkey, this year involved 25 Turkic-speaking countries and was watched by about 3 million people. 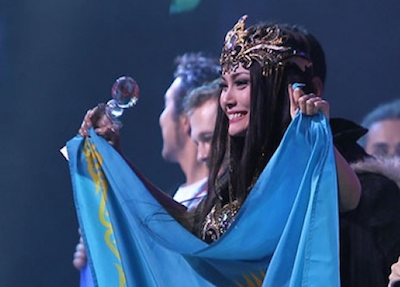 Zhanar was delighted to win, saying

“We have done everything we planned. I was first in Tatarstan, Kazan. Now the city will be one of my favorites. You cannot even imagine how happy I am that we are first. This victory in the Turkvizyon competition will be remembered for a long time. Not least because the live broadcast was watched by about 3 million people!”

This year’s event was held in Kazan in Tartarstan, with 15 countries competing in the final. Check out who was knocked out of the semi-final here. Tartastan came second in the competition. Turkish broadcaster TRT will not be too happy as Turkey finished last!

You can watch the whole programme here:

Next year’s Türkvizyon will take place in Mary, Turkmenistan.